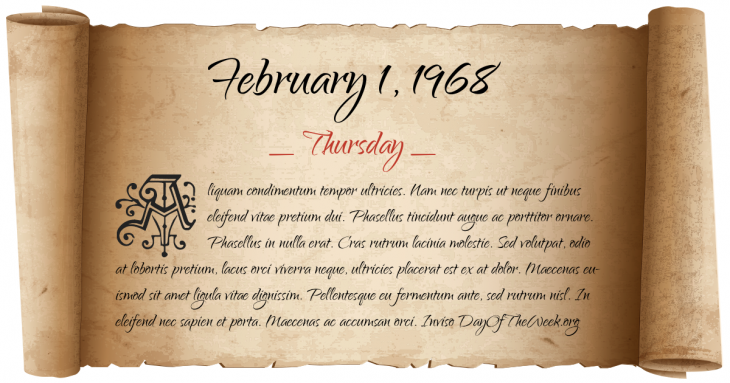 February 1, 1968 was the 32nd day of the year 1968 in the Gregorian calendar. There were 334 days remaining until the end of the year. The day of the week was Thursday.

A person born on this day will be 53 years old today. If that same person saved a Quarter every day starting at age 7, then by now that person has accumulated $4,267.00 today.

Curious to discover some fun February 1, 1968 birthday facts? Know some interesting info about your day of birth including famous birthdays and the meaning of your birth. Listen to the number-one song on the day you were born. (Sponsored link)

What no one tells you about your first name’s personality. Are there magical powers hidden in your given name? Every moniker has an undeniable character and personality. Check out Gregory’s personality and get smarter today. (Sponsored links)

Monkey is the mythical animal and Earth is the element for a person born on this day if we consider the very old art of Chinese astrology (or Chinese zodiac).