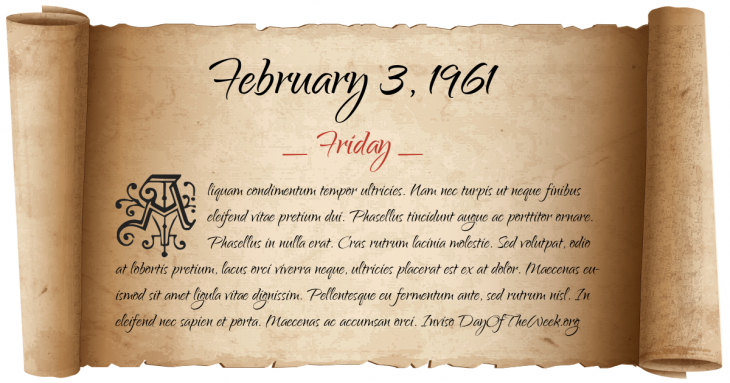 A person born on this day will be 60 years old today. If that same person saved a Nickel every day starting at age 5, then by now that person has accumulated $1,017.20 today.

Curious to discover some fun February 3, 1961 birthday facts? Know some interesting info about your day of birth including famous birthdays and the meaning of your birth. Listen to the number-one song on the day you were born. (Sponsored link)

Holy Toledo! Did you know that coffee and word games are an excellent combination to sharpen your vocabulary? Let’s give it a quick spin. Within 30 seconds, how many words can you think of from these letters KAROINIH? Check your answers here: Word solver KAROINIH. (Sponsored by WordFinder.Cafe)

Rat is the mythical animal and Metal is the element for a person born on this day if we consider the very old art of Chinese astrology (or Chinese zodiac).