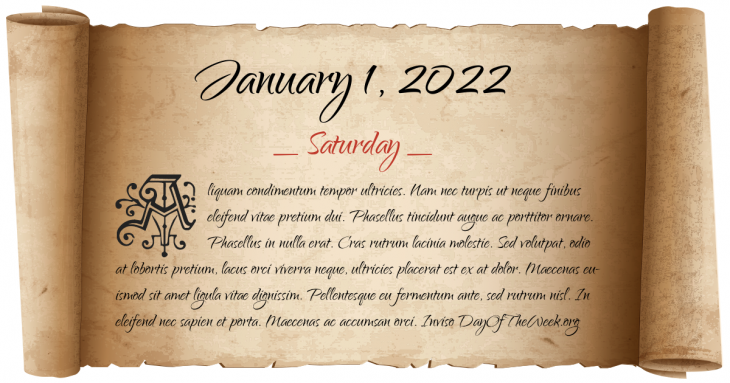 January 1: Day of the Week

January 1, 2022 was the 1st day of the year 2022 in the Gregorian calendar. There were 364 days remaining until the end of the year. The day of the week was Saturday.

Holy Toledo! Did you know that coffee and word games are an excellent combination to sharpen your vocabulary? Let’s give it a quick spin. Within 30 seconds, how many words can you think of from these letters BLVJEOIALA? Check your answers here: Unscramble words BLVJEOIALA. (Sponsored by WordFinder.Cafe)

January 1: This Day in History

The preceding day is December 31 of the previous year.

During the Middle Ages under the influence of the Christian Church, many countries moved the start of the year to one of several important Christian festivals — December 25 (the Nativity of Jesus), March 1, March 25 (the Annunciation), or even Easter. Eastern European countries (most of them with populations showing allegiance to the Orthodox Church) began their numbered year on September 1 from about 988.

In England, January 1 was celebrated as the New Year festival, but from the 12th century to 1752 the year in England began on March 25 (Lady Day). So, for example, the Parliamentary record records the execution of Charles I occurring in 1648 (as the year did not end until March 24), although modern histories adjust the start of the year to January 1 and record the execution as occurring in 1649.

January 1 became the official start of the year as follows:

Who were born on January 1?